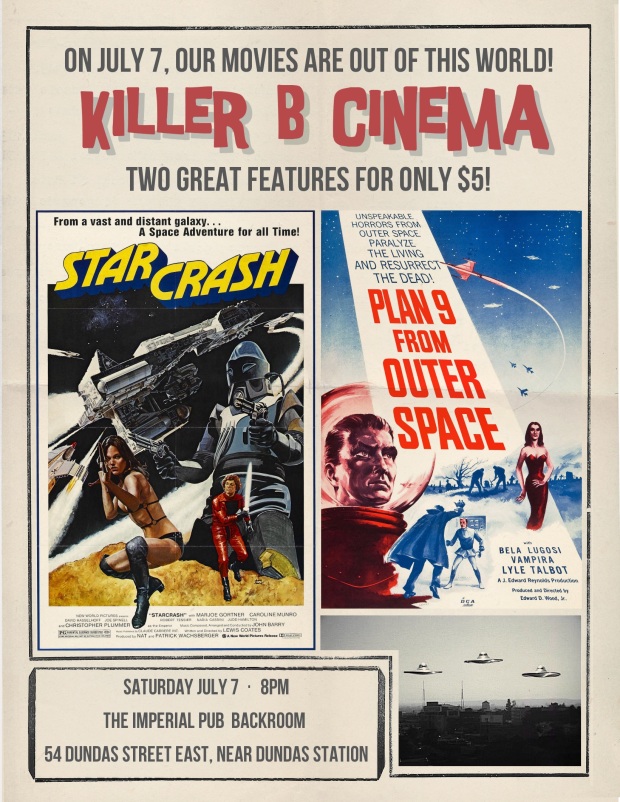 July Killer B Cinema is out of this world! Starcrash and Plan 9 From Outer Space will not disappoint! The perfect double bill and all for the low, low price of $5. That’s right FIVE DOLLARS! And there will be trivia with prizes! Spacesuits are optional! Audience Participation approved!

Plan 9 from Outer Space (80 minutes) (originally titled Grave Robbers from Outer Space) is a 1959 American independent black and white science fiction film, written, produced, directed, and edited by Ed Wood, that stars Gregory Walcott, Mona McKinnon, Tor Johnson and Vampira (Maila Nurmi). The film also posthumously bills Bela Lugosi as a star (silent footage of the actor had actually been shot by Wood for another, unfinished film just prior to Lugosi’s death in August 1956). Plan 9 from Outer Space was released theatrically in 1959 by Distributors Corporation of America (then credited as Valiant Pictures).

A huge thank you to this month’s prize sponsors! The Haunted Walk, Jeff Cottrill, Lisa de Nikolits, Caroline Colantonio, Supertash, Toronto Poetry Slam AND a raffle for a special Plan 9 From Outerspace creation by Unravelled: Crocheted Items by Carlin!

Thank you to the Imperial Pub and their staff! They make our monthly event extra amazing!

We hope to see you at The Imperial!