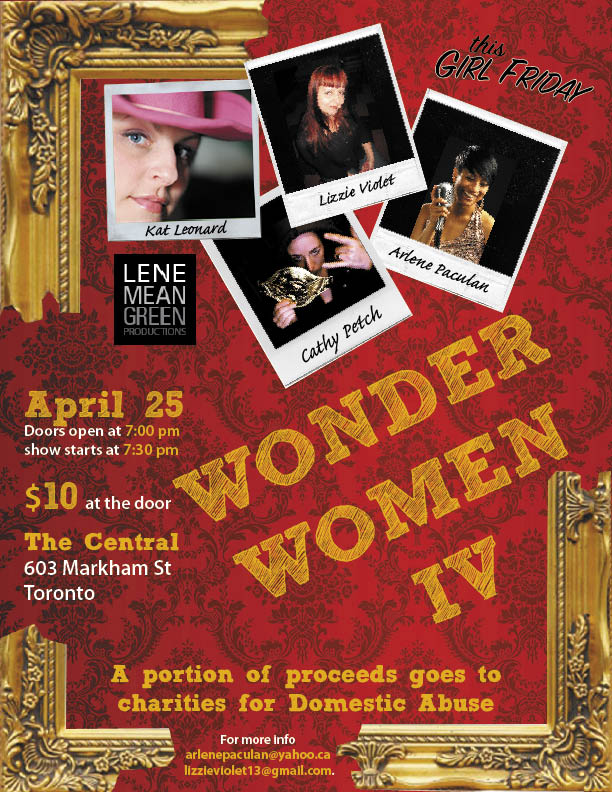 Take a mid-week break from the grind and help us celebrate with four amazing, talented and beautiful women who will be performing songs and words from their hearts and souls. They will be showcasing stories and experiences through music and spoken word, along with raising awareness for charities that aid women and children trying to rebuild their lives from the aftermath of domestic abuse.

You will be serenaded by the beautiful and incredibly hilarious Second City Veteran Kat & The MP3, shocked and titillated by slam poet and sizzling sensation Cathy Petch, to be brought back to a reality with the dark and ironic poetry of Lizzie Violet, then carried off into a beautifully lyrical wonderland by jazz/pop singer-songwriter Arlene Paculan.

Wonder Women was created by Mississauga native and singer-songwriter, Arlene Paculan, who had an idea to showcase female singer-songwriters of different genres, put them in front of different audiences so their fan base grows, as well as raise funds and awareness for associations that are female driven.  Arlene is currently planning her 5th Wonder Women which will be held at the Amphitheatre at the Celebration Square in Mississauga.

Admission for Wonder Women is $10 at the door with part of its proceeds going towards a charity that assists women who have been victims of domestic abuse. Along with the night of live music and words, enjoy some delicious food and drinks from the Central Bar & Restaurant. Doors open at 7 pm and the first performer will take the stage at 7:30 pm. Be prepared for a night of amazing vocals, melodies, words and food!

Curious about who’s who? Check the ladies out!

You have a chance to win prizes throughout the night!
*Books
*CDs
*And much, much more!

We are also accepting money donations for the charity as well.  Click HERE to donate 😀

Thank you for your support and see you on the 25th! 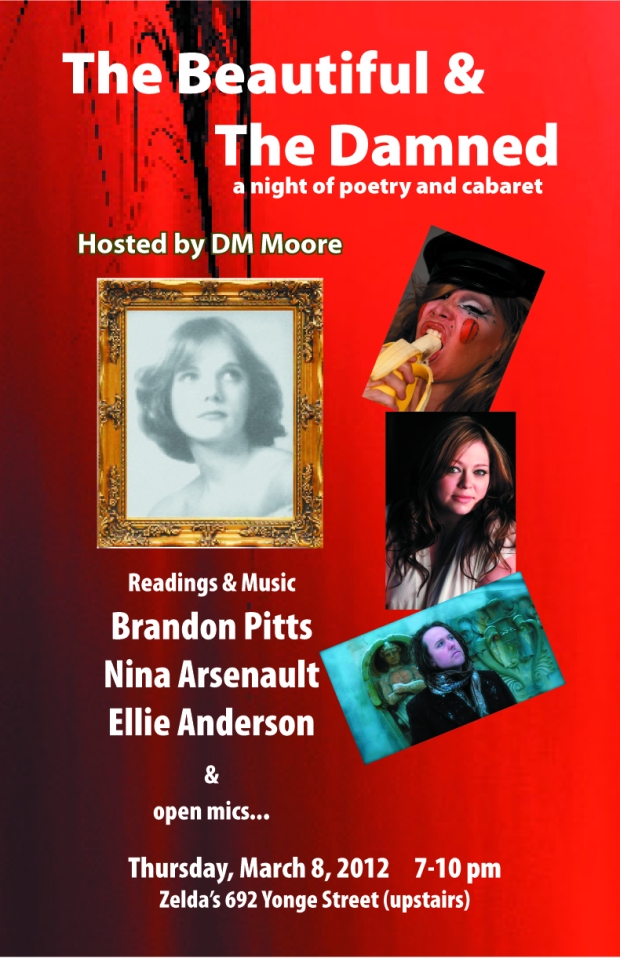 A good majority of the time television is there to entertain.  To temporarily take you away from the stresses of your life, to help give your mind a break.  Occasionally it does just the opposite, stirs up the gray matter, forcing you to face your inner demons and personal zombies.

I’m a lover of all types of horror, I work in the industry, so by the Gods I’d better.  My passion is Zombies. One of my releases for several weeks a year, is to delve into the world of The Walking Dead.  Each episode this season has left me astounded, amazed and proud that a show such as The Walking Dead is making a huge difference in the industry.  The writing is powerful, clever and poignant.  Last nights episode took it up yet another notch, but went further than that.  The ending, Dale’s death hit home.

The last few weeks have been hard, incredibly hard.  My dad is ill and because of this has me worried and stressed.  When I first found out about his illness it hit me like a mac truck.  The thought of losing a parent scares the hell out of me.  That along with the struggles of being a freelance artist, having to take a contract job that is making me very unhappy and ending in a month, struggling to find something else temporarily, trying to figure out how I’m going to pay rent and my bills at the end of the month, knowing if I had a roommate it would ease burden, but on top of it all, trying to to decide what to do about my own ‘personal zombie’.  A combination of all of this had sunk me back into depression.  I NEVER ask for help, rather crawl into my corner and fight through situations like this on my own.  This time I reached out, I asked for help.  Those I reached out to declined, those who should have been there for me, weren’t. I had a final awakening. So what does all this have to do with the ending of  last nights episode of The Walking Dead? Dale.

Dale’s own struggle mirrors my own.  Dale is the fixer, the nurturer.  He tried so hard to keep the peace, keep everyone together and to hold onto a way of life that no longer existed. Dale is the one who talked Andrea out of dying at the CDC, Dale is the one who tried to convince everyone that killing someone to save the group made them the same types of animals.  Dale is the one who continually tried to get others to understand his side of things, when all they could see is their own answers.  ‘Their way or the highway.‘ Yet Dale still tried to get through to them. That is me in nutshell.  I’ve been doing just that, trying to make something work that isn’t working. Holding on, hoping things will change, hoping for a miracle that just isn’t going to appear.  Dale’s death made me realize all of this. Dale’s death made me realize that in the end you just can’t make others see your way if they don’t want to even make the effort to open their eyes.

I NEVER cover my eyes in horror movies, ever!  Last night, the very second the Zombie started attacking Dale, I covered my face.  When everyone tried to come to his rescue, realizing they were too late, having to finish what the Zombie started, it hit me. Life is too fucking short to keep trying to make something work, when only one side of the equation is willing to open up to possibility, to let the wall down, to open the door.  Dale no longer has to bang his head on that proverbial wall and it’s time I stopped as well.

As hard, as painful and as heartbreaking as it is, in life you sometimes have to put the Zombie down. Be brave, move on.