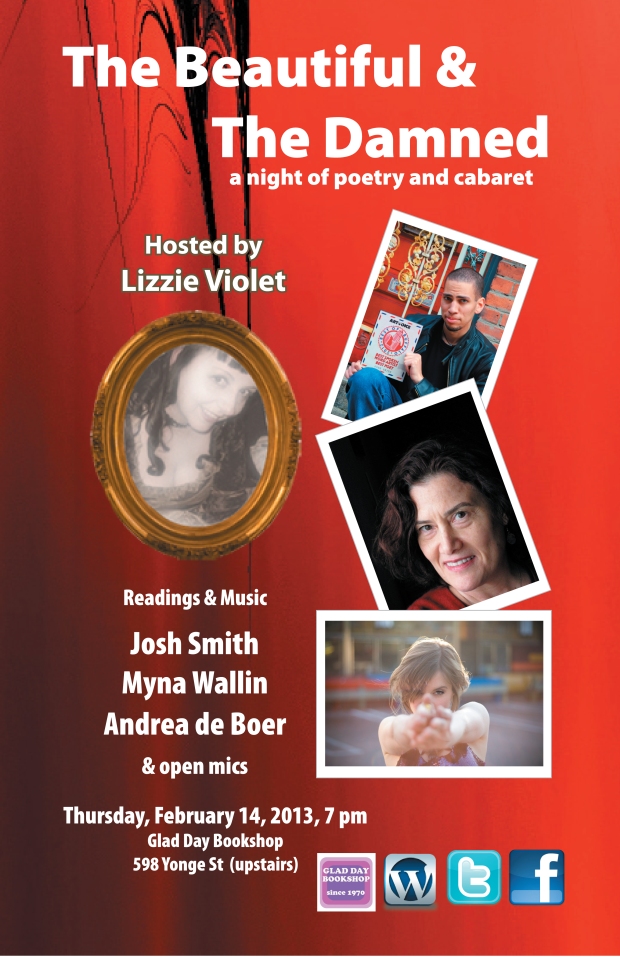 The Beautiful & The Damned, The Femme Fatale Valentine’s Edition

Hosted by your very own Femme Fatale Lizzie Violet, our February edition is dedicated to Femme Fatales. How fitting for Valentine’s Day!

The Beautiful and the Damned is a Poetry Cabaret every second Thursday of the month at Glad Day Bookstore on Yonge Street (upstairs)).

Come join us for a magical night of poetry, cabaret and decadence.

All The Beautiful and The Damned events are pay what you can.

Our February Features are:

Josh Smith – The brain is the sexiest muscle, and Josh Smith is Buffalo, New York’s weapon of mass seduction. From behind the exterior of a black-belt biker, Smith has exercised his creativity most of all, his work being published by the Buffalo News, Chrysalis Zine and Ploughshares. He’s featured across the northeast, including some of Toronto’s most prized stages. In 2012 he captured the Best of Buffalo award for Best Poet, and in 2013, joined the hosting team of the Art Bar Poetry Series.

Myna Wallin is a poet, a prose writer, and an editor. Her first poetry collection, A Thousand Profane Pieces, was published by Tightrope Books in 2006. In 2010, her first novel, Confessions of a Reluctant Cougar, also came out with Tightrope. Myna has edited a handful of books:  three collections of poetry and two anthologies. She’s read her work in Ottawa, Vancouver, Grosse Pointe, Michigan, and in Scotland at the 2011 Edinburgh Fringe Festival. Her poetry has received Honorable Mentions in both the Contemporary Verse 2, Two-Day Contest and the Descant/ Winston Collins Contest. This year she made the Descant shortlist again with her poem, “Happy Centenary, Mr. Lazarovitch.”

Myna is currently working on a second poetry manuscript tentatively titled, Death, Wildlife and Taxes. She met her boyfriend last Valentine’s Eve, 2013, so apologizes if one or two squishy sentiments find their way into her usually cynical, anti-romantic writing.

and our musical guest is:

Andrea De Boer – Andrea De Boer – Founded in 1998 by singer/songwriter and violinist Andrea de Boer, Toronto’s blueVenus is known for not only their captivating lyrical musings but also for their
polished but highly textured mélange of sounds. Described as “hypnotic and impressive” by the Frankfurter Allgemeine Zeitung (FAZ) Germany’s national newspaper, de Boer’s voice is a blend of a sultry, bluesy Janis Joplin with the youthful wariness of Fiona Apple. Partnering with Juno Award-winners L. Stu Young to work on their 2004’s self- titled EP, and Matt DeMatteo to produce their first full-length, Grin, released in the fall of 2009, blueVenus has captured the attention of Canada’s most respected producers.

With a unique blend of Indie Pop/Rock with Jazz and Latin influences, blueVenus has received many prominent acknowledgments, such as nominations at the Toronto Independent Music Awards and an honourable mention in the 2005 Billboard Song Contest. Appearances include touring Germany and appearing at Turkey’s Rocklstanbul Festival along with Garbage and Megadeth and performing at Canadian and US festivals, like Midpoint Music Festival, NXNE, CMW, Indie Week and NMW-New Music West.

“I don’t want to live. I want to love first, and live incidentally.” Zelda Fitzgerald

One of the posters I created can be seen on the big screen TV at Fuel +. It’s a popular coffee shop at 471 Church Street.